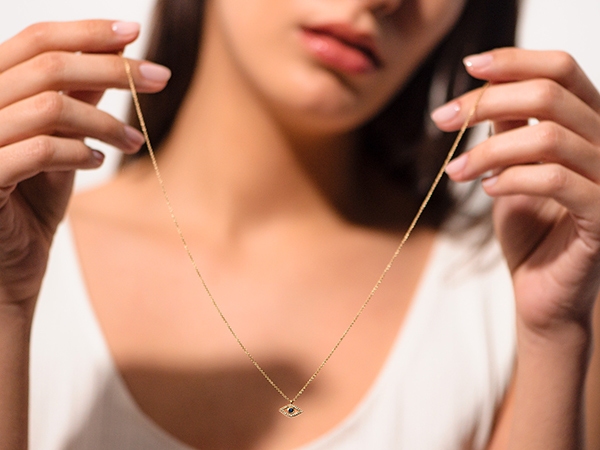 What is an evil eye necklace and why do we love to wear them? We dive into its history and see how it’s changed from being an alabaster idol to a celebrity jewellery favourite.

It’s the talisman people wear even if they are not particularly spiritual, it has seduced celebrities from Gigi Hadid to Meghan Markle, and is an integral part of any necklace or bracelet stack – we’re talking about the evil eye. A symbol of protection that exists in almost every culture and has been around since 3,300 BC.

What is the evil eye necklace?

To talk about why the evil eye, as a talisman, was so popular you need to first talk about the curse it was created to protect against. The earliest evil eye amulets, though these look more like statues rather than something wearable, date back to 3,300 BC, when they were excavated in Tell Brak, an ancient city in Syria – then Mesopotamia – by Sir Max Mallowan, Agatha Christie’s husband. In the city was a unique Eye temple, so named because of its eye idols, which appear to be offerings to an unknown deity. The presence of these statues point to the possibility that ancient Mesopotamian culture had the curse of the evil eye, though academics are divided as to whether these idols are connected to evil eye myths or not. It has also been traced to 6th century BC Greece, where an eye symbol appeared on drinking vessels.

It was the Greeks who also first wrote about the evil eye curse and even had some interesting ideas about how it manifested. In about 250 A.D, the ancient Greek poet, Heliodorus of Emesa, wrote in his work, Aethiopica, “When anyone looks at what is excellent with an envious eye, he fills the surrounding atmosphere with a pernicious quality, and transmits his own envenomed exhalations into whatever is nearest to him.” Greek philosopher Plutarch opted for a “scientific” explanation in his Symposiacs theorising that the human eye was a powerful organ capable of emitting invisible rays; one that were apparently strong enough to kill young children or small animals. In Turkey today it is customary to present newborns with an evil-eye talisman, presumably because of this very myth. Plutarch also believed certain people could use the evil eye curse more effectively; members of tribes living south of the Black Sea and those with blue eyes were particularly successful.

Although more prevalent in the Mediterranean and West Asia, the threat of the evil eye curse can be seen in such Irish myths as men who can bewitch horses with a single stare or in the stories of the Basilisks and cockatrices. The latter a two-legged dragon that kills with its stare; a stare to which only a weasel is immune. It also appears, despite its pagan connotations religious texts. Turn to Proverbs 23:6 in the Bible’s Old Testament and you’ll find this: “Eat thou not the bread of him that hath an evil eye, neither desire thou his dainty meats.” Verses 51 and 52 of the Al-Qalam Surah in the Quran state: “And indeed, those who disbelieve would almost make you slip with their eyes when they hear the message, and they say: Indeed, he is mad. But it is not except a reminder to the worlds.” There are also myriad references to the evil eye in the Talmud, the central text of Rabbinic Judaism. On such example urges Jews to perform the Rosh Hashanah Tashlich ritual – where breadcrumbs are symbolically thrown into water on the first day of the Jewish New Year to signify the casting off of sins – in a body of water that contains fish because “fish are incapable of being affected by the evil eye”.

What does the evil eye necklace mean?

Wearing the evil eye necklace gold is an example of apotropaic magic, meaning magic that deflects or turns away evil influences. Other examples of this type of magic include knocking on wood or crossing your fingers. With the evil eye, it is thought that by wearing an eye, you direct the stare back on those who would cause you harm. The evil eye talisman is traditionally blue not for any protective reason, but because the blue colour comes from using Egyptian glazed mud. This mud contains a high percentage of oxides, with the copper and cobalt in it turning blue when baked.

How to wear the evil eye

Because the evil eye is connected to emotions such as fear, there are some who think it should be worn on your left side thereby shielding your heart, and therefore your emotions and your personal life, from harm. If you want to protect your career, money, or anything outside your personal life, wear it on the right. Traditionally the eye is blue and white, however you can also choose different colours and gemstones to enhance the meaning. The dark blue of lapis lazuli brings karma, protecting your fate; turquoise connects the eye’s power to your health, while black spinel helps you hold on to your power. Style-wise, like all talismans making the choice to wear one says something about you. You could layer these pieces with other talismans, such as our ruby-set Hamsa necklace and Cosmos designs or choose meaningful gemstones will allow you to tell your story through your jewellery. Or you could just wear it solo. It’s your story, we’re not going to write it for you.

Who can wear the evil eye?

The short answers is everyone. Because the evil eye symbol appears across myriad cultures and is not tied specifically to one belief system, wearing it doesn’t amount to cultural appropriation; though maybe putting a symbol that appears in religious texts on bath mats might be taking things too far. It’s probably best, when wearing a talismanic piece such as the evil eye, to have some knowledge of its true meaning, to avoid inadvertently insulting people. Jewellery is about making connections, not causing offence.