Your guide to gold vermeil 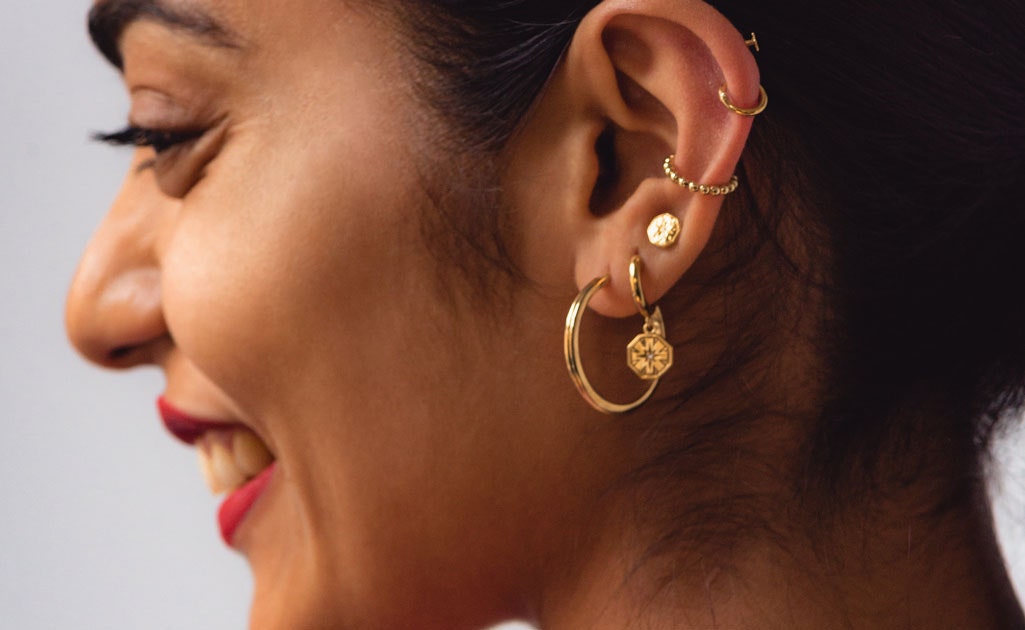 How is gold vermeil different from gold plating? Does it tarnish? Is it really gold? We answer all your questions about this mysterious metal. Here's your guide to gold vermeil.

What is gold vermeil?

We define our jewellery as being made from 14-ct recycled gold or 18-ct gold vermeil. The first one is immediately understandable but “vermeil” – what exactly is it? Is it gold plating but given a fancy French name?

It is similar to gold plating but it’s the quality of the materials that make it more luxurious.

The quality of vermeil also differs from country to country, but it is always mandated and must adhere to the national standards in order to call itself vermeil. For example, the French insist on the silver being a minimum of 80% pure and the gold plating has to be a minimum of five microns (or layers) and 18cts at the least. In the UK, we like our silver purer – 92.5% or sterling as minimum, going up to fine or 99.9% – but we’re not so decadent with the gold. Our minimum microns is 2.5 and the gold carat-age starts at 10.

At Astley Clarke, we use 18-ct gold because there’s less chance of it rubbing off or tarnishing and, well, we like to add a little luxury wherever we can.

A brief history of gold vermeil

It is thought that the earliest examples of what could be considered vermeil can be dated back to the Incas. Gold was very important to Incan culture, symbolising, as it did, their worship of the Sun God, whose representative on Earth was the Emperor. Silver was associated with the moon. There are examples of the two metals being used together symbolising a potent union between these two celestial bodies. However, it was France in 18 th century when the process had evolved into something we’d recognise today. It’s where the name comes from. Vermeil comes from the Latin “vermis” meaning cochineal, which refers to the scarlet colour produced by this insect.

The process used in the 18 th century was called “fire gilding”, involving mercury. At room temperature, mercury is liquid and gold, of course, is solid. To make gold liquid it would have to be heated to 1,000ºC. However, when added to mercury it dissolves leaving an amalgam of mercury and precious metal that can be spread like butter. This mixture is then applied to the item being gilded. Once covered fire is used to burn off the mercury. As we’re sure you’ve gathered, having mercury dust in the atmosphere is not a good thing – it leads to mercury poisoning, which is deeply unpleasant.

Luckily, in England, George and Henry Pilkington invented electroplating – a process of using electrodeposition to coat a something in a layer of metal. Through controlled electrolysis the metal to be used as coating is transferred from an anode to a cathode, which contains the piece to be plated. However, for vermeil, microplating is used. Meaning that micro layers, or microns, are applied in order to build up the gold, rather than depositing it all on the first go.

Microplating is superior to electroplating because the build-up of layers helps make the silver hypoallergenic, it also helps prevents tarnishing. The plating process stops oxidisation, which helps limit corrosion. The other benefit is that microplating allows the gold to maintain its bright lustre, thanks to the surface being super smooth so light reflects of it better.

The short answer is wearability and cost. Solid gold is heavier than silver. Gold has a density of 19.3g per cubic centimetre, silver is 10.5g. By coating silver, you have lighter pieces, which, when it comes to things like earrings, means you can wear more dramatic designs without feeling like you have weights attached to your ears. Solid gold is also expensive at the moment. Political unrest and a slowing global economy leads people to invest in sureties, such as gold, which in turn pushes up the price. Vermeil allows you to wear gold but without needing to rob a bank.

How to care for your gold vermeil

Perfumes, creams, and make-up can all sit on the surface of the vermeil and dull its lustre. While you can’t do anything about it touching your skin and therefore picking up remnants of your beauty regime, you can help prevent the surface getting clogged with product by putting your jewellery on last.

Chemicals, such as chlorine, can be very damaging to your vermeil, so make sure you remove any jewellery before you go swimming. Same is true of household cleaning products such as bleach. Either wear gloves or remove your jewellery before tackling the kitchen sink.

If you can, try and store your pieces in an airtight container. Limiting their exposure to oxygen when you’re not wearing them will slow any possible tarnishing, though, if the vermeil is done correctly that shouldn’t be an issue.

Regularly polishing your pieces with a soft microfibre cloth will remove daily grime and bring back its lovely lustre and shine. Make sure it’s a soft cloth, gold vermeil is real gold on the outside and therefore susceptible to scratching. This also works if you should find any spots of tarnish. But, like we said, that shouldn’t happen. At least not with our jewellery.

For a deep clean, run a bowl of lukewarm warm with a little washing-up liquid in it. Don’t just throw your pieces in there, instead dip a soft lint-free cloth in the water and gently clean your jewellery. No brushes, not even ones with soft bristles. It’s too harsh for gold and you’ll end up scratching the gold coating.